Reliable, Advanced Navigation in a Portable Package. Your handheld reference, wherever you fly.

STOCK WITH SUPPLIER - Contact us for a lead time

The Aera 760 will become your handheld reference, wherever you fly with its bright 7″ screen, dynamic moving maps and the easily entered flight plans feature.

introducing the aera® 760, a premium aviation portable that is purpose-built for the pilot and the cockpit. The aera 760 boasts a 7-inch bright, sunlight readable touchscreen display complete with comprehensive chart options in a compact and dedicated portable GPS. Additional features of the aera 760 include the option to load instrument approach procedures, arrivals and departures, approach chart overlay on the map, Garmin Connext® wireless connectivity, as well as the option to integrate it with select Garmin avionics.

Featuring a modern yet rugged design, the aera 760 is an all-in-one aviation portable complete with a built-in GPS/GLONASS receiver that is optimized for the cockpit. Its bright, 7-inch sunlight readable display can run on battery power for up to four hours on a single charge. Along the bezel, an industry-standard USB-C connection is used to charge and power the aera 760, while a microSD card slot allows pilots to load topography and street maps or use it to easily transfer user waypoints. The aera 760 features an intuitive user-interface resembling that of manyother popular Garmin products such as the GTNTM Xi series, G3XTM Touch and Garmin PilotTM allowing pilots toeasily transition between multiple Garmin products in the cockpit. Capable of operating in harsh conditions, the aera 760 has also been tested and hardened to meet stringent temperature and vibration standards

New to the aera 760, pilots can load departures, arrivals and instrument approach procedures (IAPs) within a flight plan, which can be wirelessly transferred to a navigator in the cockpit. Once a procedure is loaded within the aera 760, pilots have the option to view the chart or they can overlay it on the moving map. IFR enroute charts, VFR sectionals and Garmin FliteCharts® are also geo-referenced, providing optimal situational awareness. Jeppesen electronic charts are compatible with the aera 760 and give customers worldwide access to instrument approach chart information. In addition to procedures, victor airways, user-defined holds and holds over an existing navigation fix can be entered into a flight plan.

Built-in Wi-Fi® and Bluetooth® allow the aera 760 to take advantage of Garmin Connext wireless connectivity inside and outside of the cockpit. When connected to Wi-Fi, pilots can easily download aviation database and software updates without the need to physically connect it to a computer. Prior to departure, pilots can also view worldwide weather information on the aera 760 when it’s connected to Wi-Fi. In the cockpit, it is capable of wirelessly connecting to select products such as the GTXTM 345 or the GDL® 50 to display the benefits of Automatic Dependent Surveillance-12 Broadcast (ADS-B) traffic, Flight Information Service-Broadcast (FIS-B) weather , SiriusXM aviation weather and more via Bluetooth. Exclusive features such as TerminalTrafficTM and TargetTrendTM can also be viewed on themoving map and dedicated traffic pages.

Pilots can hard-wire the aera 760’s power, audio and dual RS-232 connections to receive additional benefits. When connected to a navigator such as the GTN 650Xi/750Xi, GTN 650/750 or the GNS 430W/530W, the aera 760 can send and receive flight plan data that is entered into the navigator over a serial port so all products remain synchronized throughout the flight. It is also capable of wirelessly connecting to these navigators when paired with a Flight Stream 210/510. When connected to a NAV/COM such as the GTR 225, GNC 255 or GTR 200, frequencies and airport identifiers can also be transferred from the aera 760 to the corresponding NAV/COM. For aircraft flying in visual conditions, pilots can optionally connect the aera 760 to select autopilots to fly lateral GPS and single point vertical navigation (VNAV) guidance. For example, pilots flying in visual conditions can fly a VNAV profile from their current altitude to pattern altitude using the aera 760 fully coupled to the autopilot.

3D Vision technology displays a virtual 3D perspective view of surrounding terrain, obstacles and airports, as well as a horizontal situation indicator (HSI) that is capable of showing lateral and vertical deviation bars. When the aera 760 is panel mounted or paired with a compatible attitude source such as a GDL® 50 or GTX 345, pilots can view synthetic vision (SVX), which adds the display of back-up attitude information on the portable.

The aera 760 also features fuel price information, an E6B flight computer and weight and balance calculators. The E6B can be used prior to a flight to aid in calculating fuel burn, estimated time of arrival (ETA) and more. While in-flight, the aera 760 utilizes ground speed information to recalculate fuel burn and ETA. Helicopter operators also have access to features tailored to their unique operations, such as WireAwareTM wire-strike avoidance technology. WireAware overlays power line locations and relative altitude information on the moving map and provides both aural and visual alerting when operating near power lines. With optional map data, pilots can also enter street intersections or non-aviation waypoints. GPS altitude display is offered in both mean sea level (MSL) and above ground level (AGL), so they are easier to identify relative to the aircraft flight path. 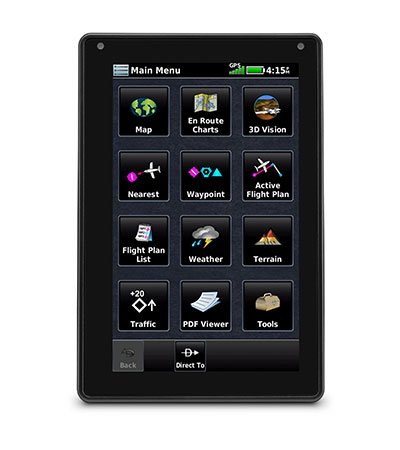 The large, sunlight-readable 7” touchscreen display is twice as bright as many tablets, with portrait and landscape display options and intuitive pinch to zoom and panning. 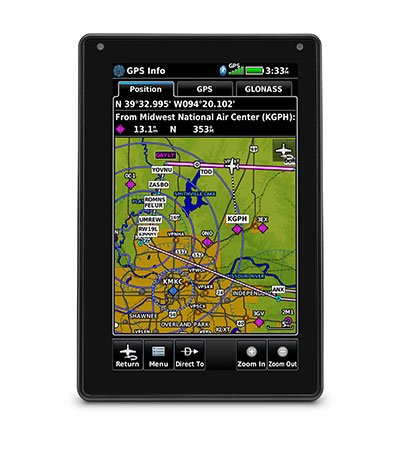 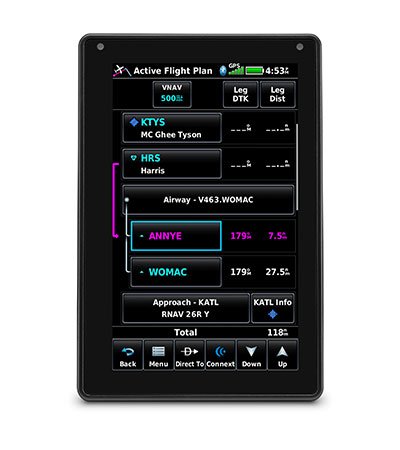 Creating flight plans is easy. Enter a starting waypoint and destination, then insert segments — including airways, as well as IFR departures, arrivals and approaches. 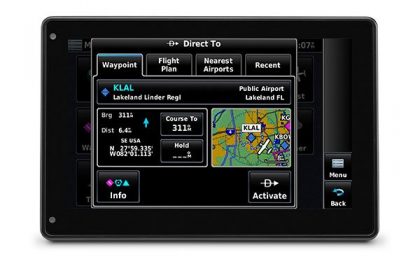 A Direct-to key on the screen lets you quickly enter a direct course for any selected waypoint. A menu of nearest airports and flight plan waypoints makes for easy entry. 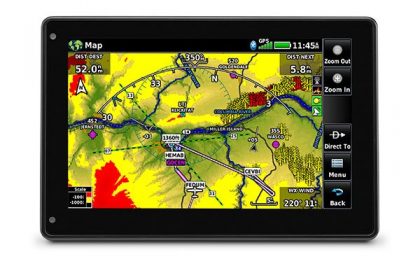 View ground references — including airports, cities, terrain, obstacles and more — on the dynamic map display to easily determine your position on VFR flights. 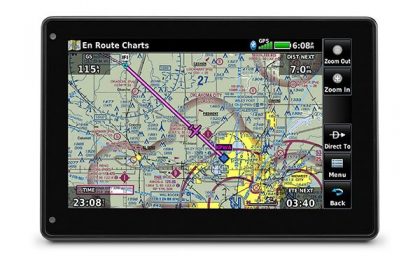 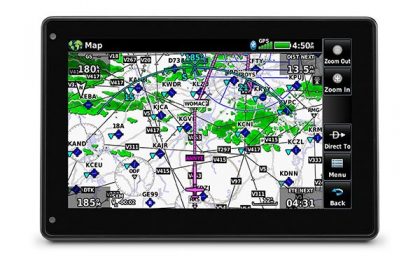 Use IFR map mode to display and navigate on high or low enroute airways. Touch to view Minimum Enroute Altitudes and distances between intersections. 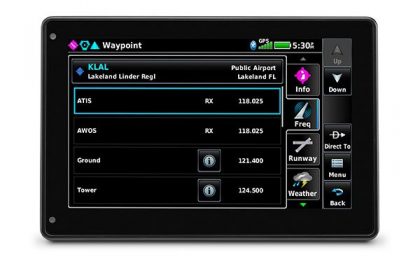 With an optional power/data cable, you can find and upload frequencies to select radios, including GTR 200 Comm radios, GTR 225 Comm radios, GNC 255 NAV/COMM radios and more. 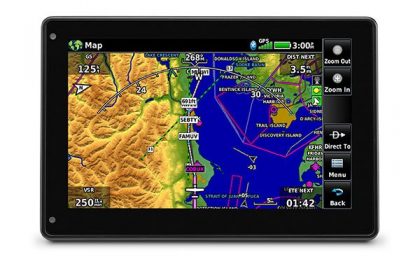 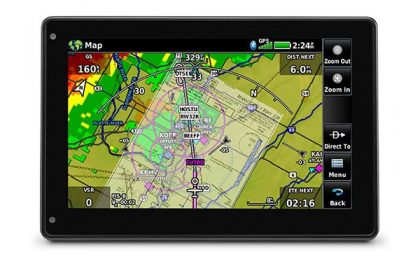 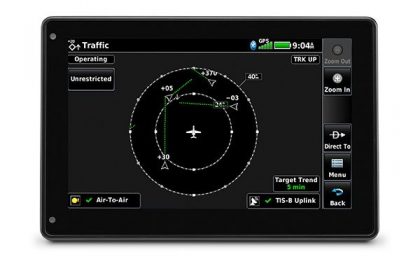 Patented TargetTrend relative motion tracking on the aera 760 gives pilots a faster, more intuitive way to judge traffic closure rates and trajectories — so you can identify the greatest threat. 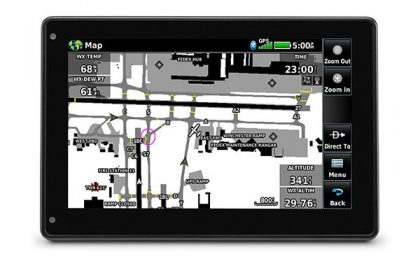 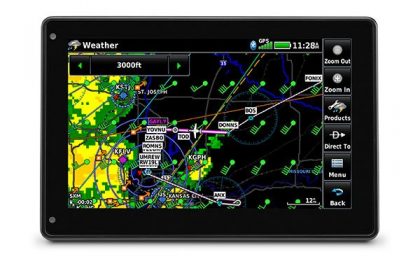 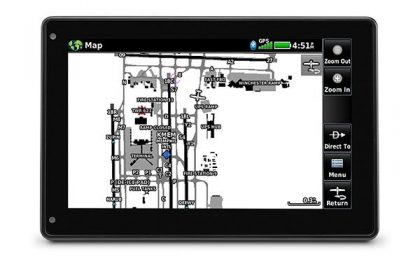 Upon landing, georeferenced SafeTaxi diagrams on aera 760 automatically help track your location on hundreds of airports and even identify published hot spots. 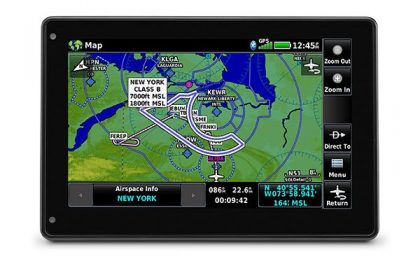 Patented Garmin Smart Airspace guidance highlights the airspace nearest your current altitude so you can quickly identify your location relative to the airspace around you. 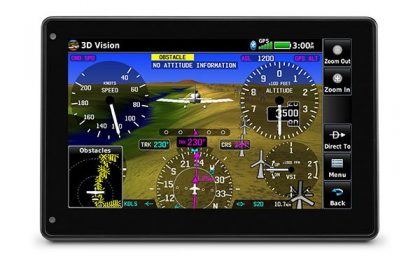 3D Vision technology gives you a virtual 3D behind-the-aircraft perspective view of surrounding terrain, obstacles and airports, as well as traffic (when equipped with ADS-B “In”). 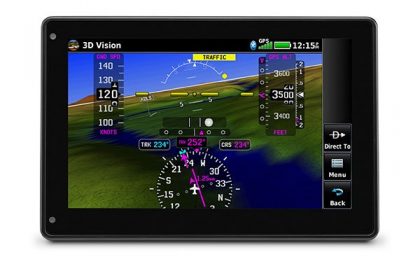 View Synthetic Vision (SVX™) by panel-mounting your aera 760 and using its built-in AHRS, or by connecting it to another device with an AHRS, such as a GDL 52 series datalink. 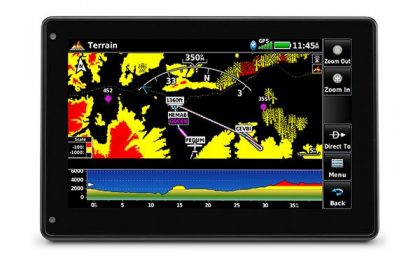 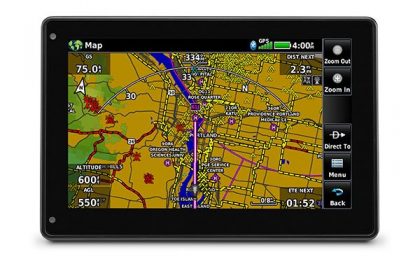 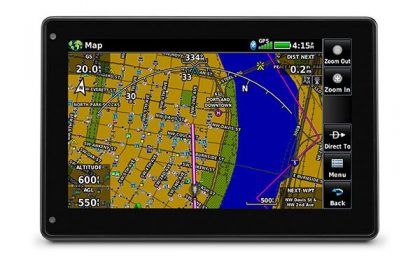 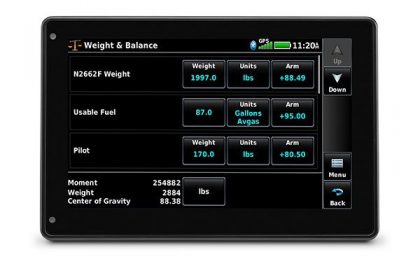 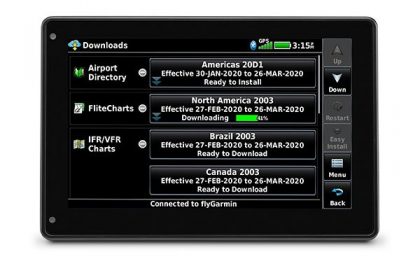 View Internet weather on the ground for pre-flight planning, and update databases at home via Wi-Fi. Plus, stay current throughout the year with a single annual subscription that includes all the databases you need. 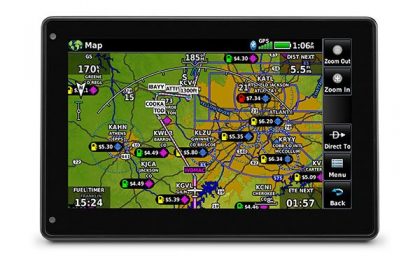 Fuel price data can be overlaid on the map for at-a-glance awareness of the prices in an area — or viewed on the airport directory page. 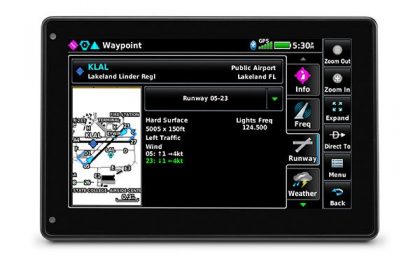 Touch an airport symbol on the map to view its airport information page, and see runways, frequencies, NOTAMs, FBOs and more. 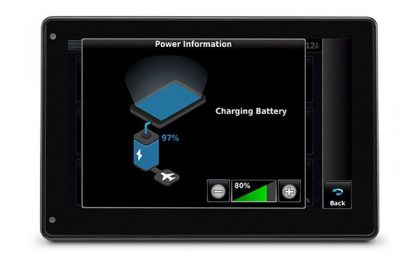 Get up to 4 hours of flight time on each charge, or easily power it in-flight with a USB-C® cable. 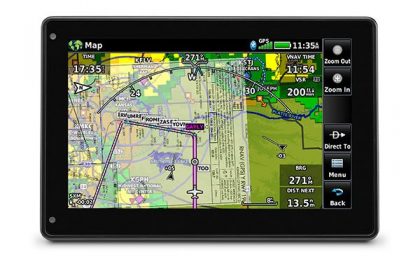 aera 760 combines many of the capabilities of panel-mounted avionics with a value-packed, purpose-built package. It’s ready to fly, right out of the box.

Do you need an avionics installation quotation? Fill in our no obligation quote request formQuote Request
+ +